The roots of violence 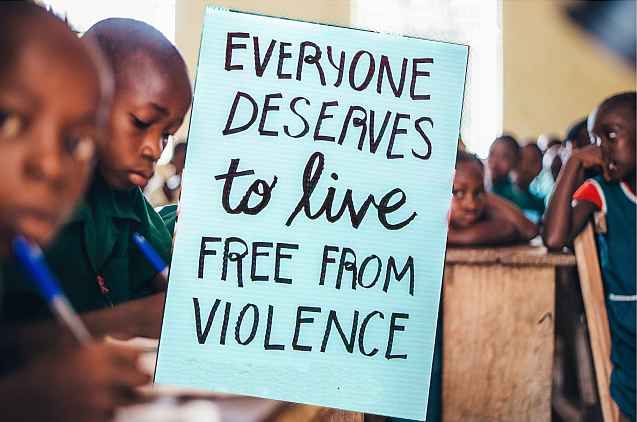 Horror stories about violence among children are becoming more and more common. As incredible as it may seem, the brutal abuse, torture and even murder of children by other children is a growing phenomenon. Not only is our society plagued by juvenile delinquency, but we must now worry about child criminality as well.

Nowadays, kindergarten children solve their differences simply by smacking each other. The same applies to grade school children.  Scuffles and fistfights are not only common on the playground, but in the classrooms as well. Experts on child behaviour agree that violence seen on television plays a vital role in this alarming trend. Small children are not yet able to differentiate between reality and fantasy, and they believe that what they see on the screen is really happening. This is why showing violence on television is dangerous.  Small children who watch a lot of TV believe the world is a violent place. They are actually fascinated by violent scenes, and in their childish innocence are convinced that brutality is the solution to every problem.

It is not necessary to list the countless examples of brute force and physical assault children are exposed to every time they turn on the TV. The question is: is it necessary for the TV to be on in the first place?

Perhaps it is time to confront the fact that this prevalent brutality actually has its roots in the family, sometimes without parents even being aware of it. To be precise, the roots of the problem lie in the attitude of adults. It is a direct result of the way people are teaching their children to see the world.

In the past, parents were able to teach their children by setting a good example.  Through their own behaviour, they taught their children to get along with others, to show respect for others, and to live together with their neighbours in peace and harmony. They stressed the importance of being friendly and helpful.

By teaching children to behave properly and to show respect for others, parents were establishing the foundations necessary for a harmonious life. Children learned at a very young age not to hit others. They learned the correct way of dealing with other people. They learned the difference between right and wrong.

Educators are complaining that children no longer learn basic values and morals at home. Religion and ethics classes in schools cannot replace the basics that are lacking at home. Children simply are not being taught the ethical and moral values necessary for successful everyday living. They know nothing about values, because it is not a subject that is ever talked about.

In the townships of South Africa, where many households consist of only one parent and fathers are mostly absent, a good upbringing is a big concern, especially if the remaining parent has a day job to make ends meet and the children are left to their older siblings. Cases of abuse and brutality between spouses are daily news.

How can we expect children to grow up into considerate, peaceful citizens if many of them are themselves victims of abuse and brutality? How many children must live with conflicts, abuse and violence on a daily basis in their homes? The fact is, one out of every three children exhibits behavioural disturbances ranging from the inability to concentrate and difficulty in establishing social contacts, to overt aggressive behaviour.

Obviously, parents are not solely to blame for these problems. Acceptable behaviour is no longer determined only by parents and other authority figures such as educators.  Children are greatly influenced by their peers, by television shows and by pop culture in general. Anyone who listens to the graphically violent lyrics of popular musicians will realise what a dangerous influence they could have on a child’s imagination.

Good manners, compassion, and human kindness are all necessary ingredients for harmonious communal living. If these basic beliefs and values can be ingrained in our children, they will grow up to be happy, productive members of society!

But where do we start to adress the problem? Parents who had a bad example most of the time pass it on to the next generation. It is a cycle we need to break and it needs to start with the current generation.